Re: Blur 5 Grand Final: Results Video is Live; Demos Up

Are you a rad N player or want to put some rad N players to the test? Talk about your skills and challenge each other at N in this forum.

I'll be posting the demos, including non-participatory demos, within the next hour or so.

The speedrun map is "Asteroid Climb".

Here is the map data:


The highscores map is "From Clutches".

Here is the map data:


Bonus: Since Eddy has byes on both rounds, he currently has no incentive to make any runs, so I have decided to give an extra incentive for everyone, including Eddy: The next round will only be seven days; however, the overall 0th-scorer from each map this week will get to see the respective map (or maps if they get 0th in both categories) three days before anyone else (making it a total of ten days for these players). In the unlikely event of a tied 0th, all tied players will get the time advantage (assuming the tied players aren't in a direct match-up, in which case, only the first player to submit their run will qualify.) Let me reiterate: players with byes have no obligation to PM me any runs; I am merely leaving the option open for you to try to secure an edge for the next round. All players still in the competition are eligible for this advantage. Good luck!

with subject labeled hs or sr. (or both if dual submission). Scores secret until deadline. Go time!

To sign up, you will need to fill out a dronie noms form. You only have to nominate one thing to be considered, but doing more would be beneficial (please make sure you post your numa name here if it differs from your highscoring/forum name; don't worry, it can be altered once you're accepted.)
This nominating process shows to me that you're dedicated to the way of the ninja. (Again, don't worry, you can can make changes later if you want to add more nominations.)

After that, you can simply post in this thread that you're down to play. The sign-up process will last until Dronie voting begins (or at my discretion). The tournament will run in a similar fashion to last time, but with some interesting changes. Since I've retired, I won't be competing, but it will free up time to make sure the tournament runs smoothly.

Also, like last time, there will be both a highscore category and a speedrunning category. Please let me know which category you want to be in. You can be in both if you wish. You don't have to be a 'pro' to enter, either... just give it a shot! Last time artic_pony came from nowhere to take home speedrun glory!

rules
Below are the revised rules. Even if you are familiar with the rules, please read the following rules, as they have been altered slightly. Of particular note is rule 3 and 4.

0. Submit runs on your allocated map in the correct mode (depending on what you've chosen.) After the round has expired, your points will be tallied up, with 10 points for 0th, 9 points for 1st, 8 points for 2nd, etc.; this continues all the way to 9th place, where that player will receive a single point. All other players will be given 0 points for the round.

1. After 5 weeks of point-based competition, only the top-8 players from each category will advance to the finals.

2. The finals system will be seeded using the following chart. It is highly advantageous to finish in the top 4, rather than just limping into the 8.

ska wrote:The finals system will work exactly like it did for Blur 4; that is to say, the top four players in each category will get a second chance in their respective category for the first round of the finals, and will get to skip to the 3rd round if they win their first match. The bottom half of the top 8 (i.e. 5th-8th using non-N ordinal placing) will have to play and win all 4 rounds to win overall, whereas a top-4 player can theoretically win by only playing three rounds of finals. Thus, there is a big incentive to not only make the final 8, but also to secure a top-4 place. To find out more about the system, refer to the Blur 4 chart or this wiki page.

3. From now on tied scores will no longer share points. There are two main reasons for this: First of all is collusion prevention; both players will have less motivation to improve if they are tied with other players. Secondly, it will encourage players to submit their runs as soon as they make them, since points will be awarded on a first-in, best-dressed system.

4. In the event of a tie between two players after five rounds, the positions will be determined by the highest total score for highscores, and conversely, the speedrun will be determined by the lowest total frames. In the highly unlikely event of a tied total score/frame count for either category, a countback will be initiated, with the last player to be ahead in the match-up(s) in question being deemed to be of a higher position for seeding purposes. For a countback score to be counted, it must have finished in the top-20 at the round's end. Amendment: In case of a countback in speedrun mode, affected players who haven't submitted a run for a particular round will assume the frame count of the lowest top-20 ranking score that was submitted by a competitor plus 200 penalty frames. Since it is possible that point totals will be tied after five rounds, please consider submitting a run, even if it will fail to make the top-10, as such oversights might cost you dearly down the track.

Current Standings after Round 1 of Finals: 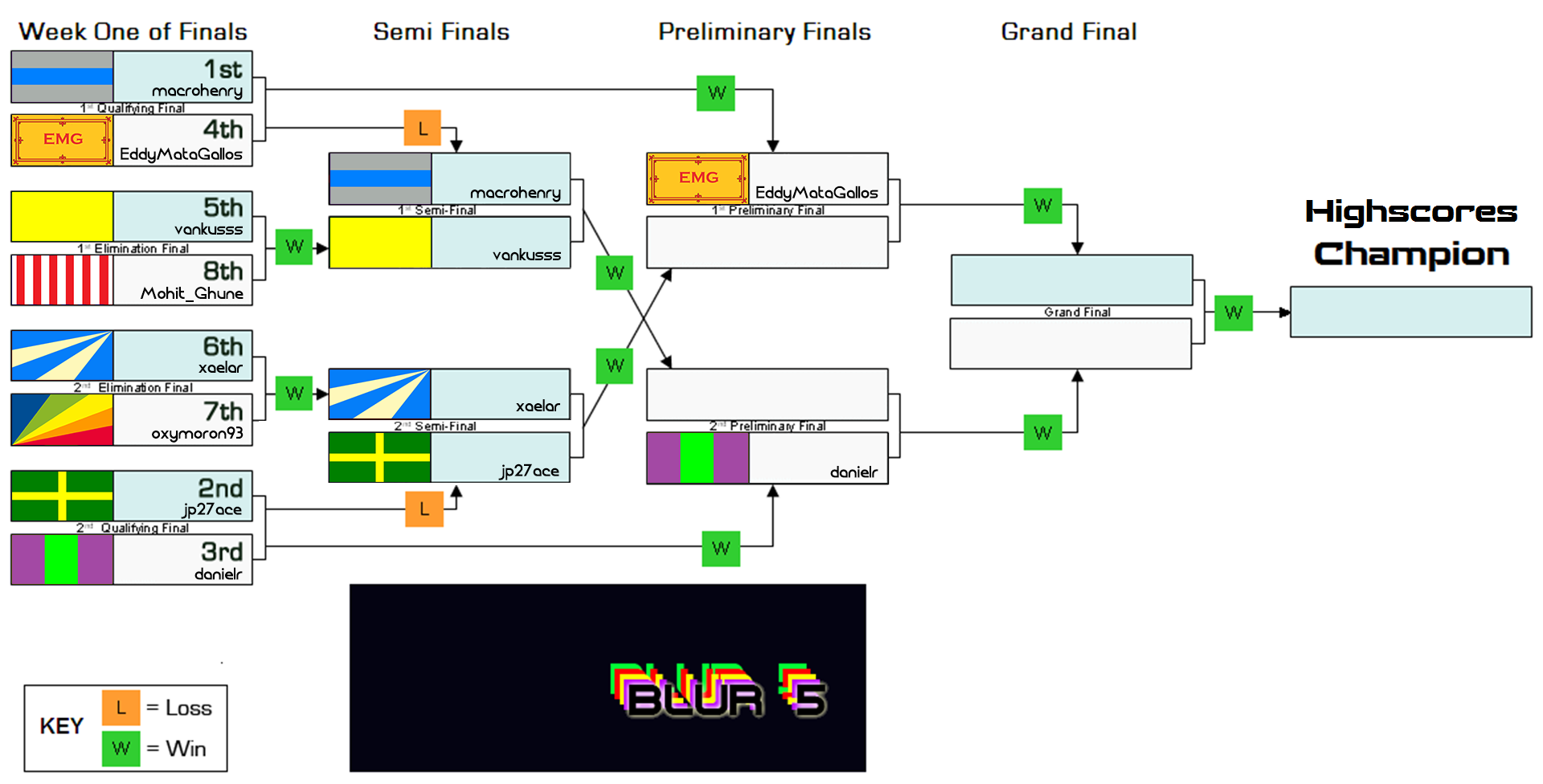 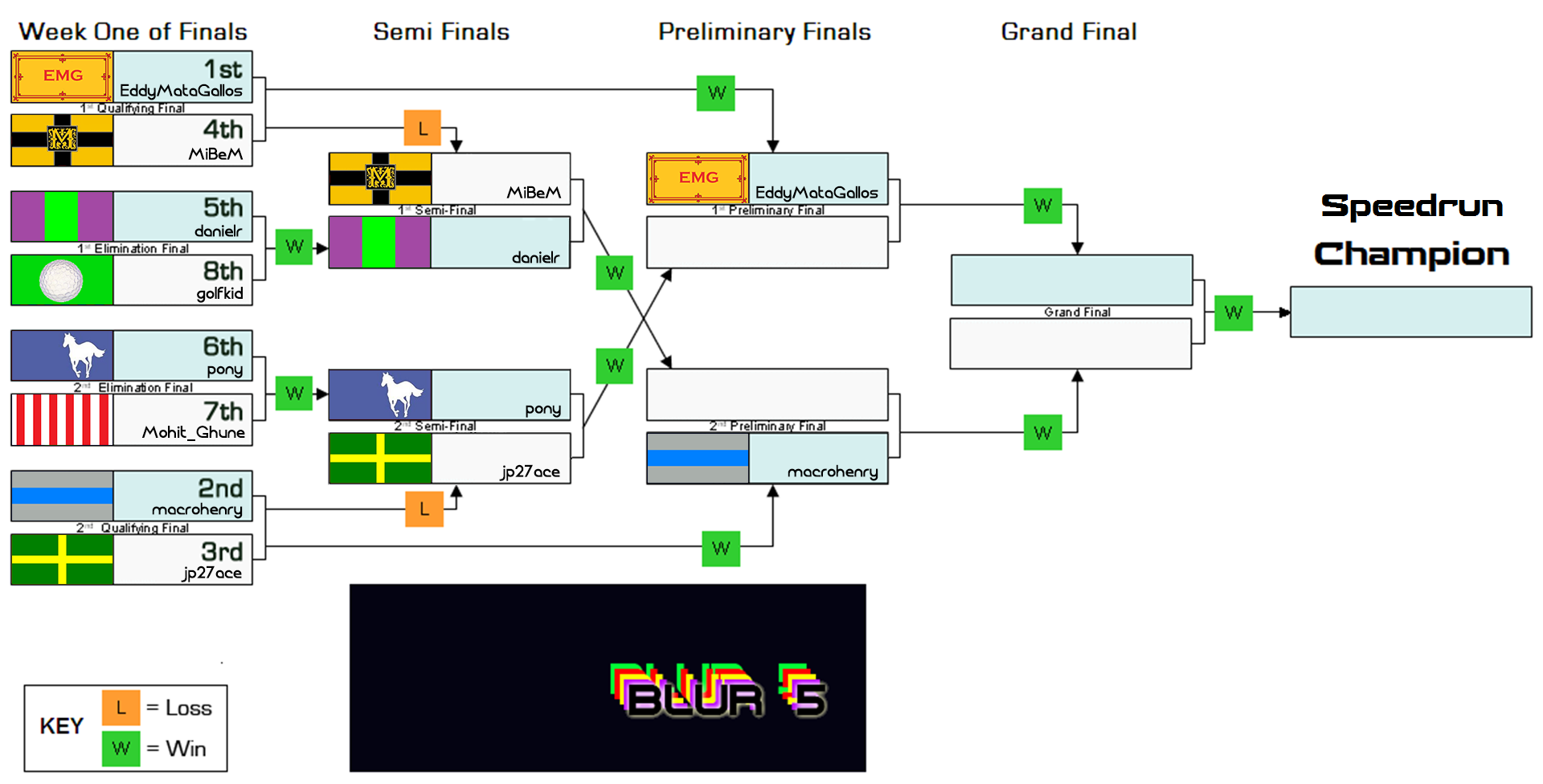 In for highscoring. Not that I expect much, but yeah.

I have already nommed for the dronies, that should count?

I have already nommed for the dronies, that should count?

Yes. If you've already nominated, then you've got nothing to worry about!

Put some noms in, count me in for highscore and speedrun both. Hopefully I can do better than last time :)

I'm in for speedrun! I don't know the exact rules but I assume it's not complicated.
a.k.a. MoleTrooper/Molenator

Put me down for both, I'm yet to take part in a BLUR so this should be fun.

Inspired wrote:May as well put me down for both, someone needs to come second to last again.
I've submitted by Dronies Nominations under nDEAVOUR my NUMA name, my username on the servers should be Inspired, I haven't been on since around the last Blur.

No worries... thanks for following the instructions!

Sounds really cool. I am in for both HSing and SRing.

I would like to be in on this, hs and sr :)
will pro's and amateurs be divided again?

shomman wrote:I would like to be in on this, hs and sr :)
will pro's and amateurs be divided again?

There will be no division between pros and amateurs (like last time). You will all be duking it out for the coveted first place position in each category. Note that nobody has ever won in both categories, nor has anyone ever won on multiple occasions. I am acutely aware that there will be a large variation in skill level, so I'll be implementing some concepts that will encourage strategy, wit and collaboration to keep the field reasonably balanced and—most importantly—fun!

That's fine; there's absolutely no experiential prerequisite for joining Blur; just make sure you can get NReality working well, and all will be well.

I'm in and I've just voted.

Thx to usaswim for this awesome signature!

Holy shit. :O I don't know how this contest works, but I'm in for hs and sr. I'll probably do my nominations this weekend.

I'm in for both, still haven't filled the Dronies, but I'll be submitting some noms this weekend hopefully. 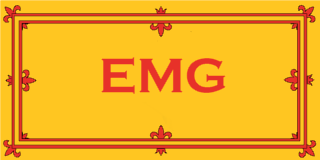 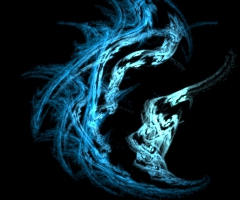 I am in for speedrun only.
But ska, I only filled my name in the form, as I have no idea of any maps recently.
I hope you still count me in.

Etz wrote:I am in for speedrun only.
But ska, I only filled my name in the form, as I have no idea of any maps recently.
I hope you still count me in.

As long as you fill in at least option. Even if that means finding a single highscore run you liked and submitting it, then you will be fine.

Holy Motherfuck of God. Shit. Fuck.
van, xela, TRO AND Eddy all together in this competition? Are you kidding me? :o
I better back out.
Lol jk. I will try my best, but these badasses have made this comp some real shit.
Last edited by Mohit_Ghune on 2015.02.22 (18:26), edited 1 time in total.

Etz wrote:I am in for speedrun only.
But ska, I only filled my name in the form, as I have no idea of any maps recently.
I hope you still count me in.

As long as you fill in at least option. Even if that means finding a single highscore run you liked and submitting it, then you will be fine.

Alright, I guess I'll find something I can nominate. I will do this in a few hours I guess.

Mohit_Ghune wrote:Holy Motherfuck of God. Shit. Fuck.
van, xela, TRO AND Eddy all together in this competition? Are you kidding me? :o

All we need now is Mr_Lim and Trib4l and we would be set.

But in all seriousness, has there ever been an N contest which has had 3 grandmasters competing simultaneously?

Mohit_Ghune wrote:Holy Motherfuck of God. Shit. Fuck.
van, xela, TRO AND Eddy all together in this competition? Are you kidding me? :o
I better back out.
Lol jk. I will try my best, but these baddasses have made this comp some real shit.

Users browsing this forum: No registered users and 6 guests